I have been using the wordpress app for awhile now reading friends blogs .  Now I have officially created my own wordpress blog.
Please follow me over here:
Http://welcometokellyland.wordpress.com
I will eventually be shutting this blog down.  Hope to see you over at the new blog!
Posted by Kelly at 9:16 AM No comments: 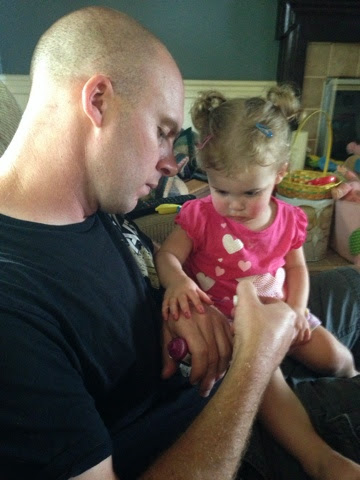 There is something about this photo that melts my heart.  Ben is tender and loving with her.  I knew he would be but I never quite understand to what level.  They definitely have a special bond that only daddies and daughters can have.


What is #MicroblogMondays you ask?  Click here to find out!

Every night Ava wants to go outside after dinner.  We usually swing a little, slide a little, and throw dirt/stones into the pond a little but tonight was different.  It was raining.  It was not raining hard enough to stop us from going out but the sprinkle made Ava very upset and she would not leave the comfort of the front steps.  She just sat there pathetic complaining about the rain.  It was one of her saddest moments.  Mommy thought it was quite cute! 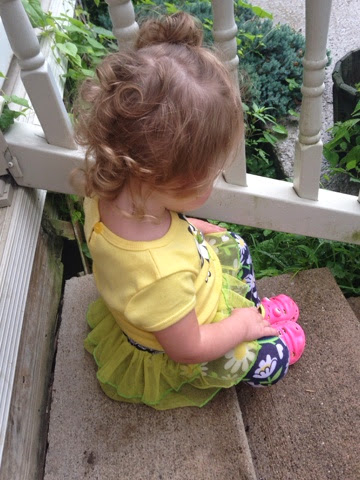 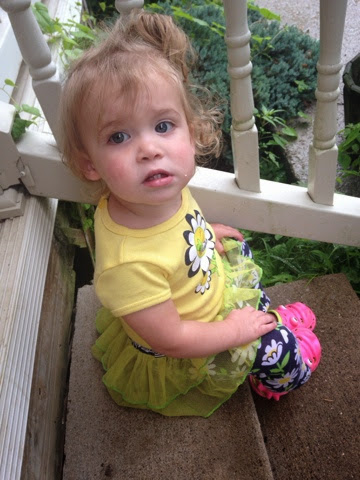 A little catching up

This first trimester and part of the second trimester has flown by so fast!  I have been exceptionally busy at work.  I have wanted to post an update on how things for a while now.  I am 19 weeks tomorrow.  19 weeks! That is almost half way.  Again, did I mention about time going by fast!


The first trimester was rough.  I was sick a lot.  I would get sick mostly in the evenings between 6:00PM and 8:00PM.  Not that I want to get sick but I am glad it was mostly in the evenings so I wasn’t throwing up at work.  I was only sick a few times with Ava and this little bundle of joy made up for it.  Ava now pretends to throw up now.  It is priceless.   I am still getting sick once every couple of weeks.  Direct sunlight affects me so I have stayed in the shade as much as possible when we are outside.


So far I have only gained 4lbs from my starting weight at 164lbs.  However, due to the morning sickness I lost 4lbs making overall weight gain about 8lbs.  I am not doing anything special.  I haven’t been hungry with this pregnancy like I was with Ava.  I had gained 40lbs with Ava.  My goal with my pregnancy with Ava was not to weigh more than Ben.  I wasn’t completely successful but I managed to stay with 5lbs of Ben.  For this pregnancy, my goal is to not weight more than 200lbs.  I feel like I am on track but I do need to start moving my body more.


I have been giving a lot of thought on whether I wanted to try Hypnobabies.  I have read blogs that used it and loved it.  I thought I wanted to next time around and now I am not so sure.  My birthing plan with Ava was ‘go with the flow’ and to make it to 4-5cm without drugs (I succeeded).  I didn’t want to be stressed about things not going according to plan so I opted out of a well-defined plan.  I want to continue that with this birth.  I figure that the Hypnobabies program couldn’t hurt the ‘go with the flow’ plan.  If anything, I see it making it easier.  I have not purchased Hypnobabies self-study program and for some reason I keep second guessing myself on making the purchase.

Today, we met with our regular obgyn.  We did another ultrasound to confirm if we were have twins.
Baby A is measuring 10 weeks 6 days and the heartbeat was 173.
Baby B is no longer with us.  Baby B had no heart and is smaller than before as my body has started to absorb the baby.
I am....upset, saddened, emotionally drained.  I am spending the day home by myself.  Ben went back to work and Ava is stull at daycare.  I needed this afternoon to grieve.
I usually try to find the silver linings when bad stuff happens; I have thought of a couple but they just do not seem to matter.
I should mention we are extremely excited and grateful that baby A is doing so weel and growing strong!
Posted by Kelly at 11:37 AM 4 comments:

The other day I told you about our first ultrasound.  Let me tell you about ultrasound #2.
Ben was suppose to meet me at the doctors.  He was working.  He was running late after transferring some  outstanding citizens to jail.  He called and said he was going to be at least another 20 minutes and to go ahead with out him.  I asked if he wanted to facetime but he said no judst video the heartbeat.
The nurse held the phone to get a good video of the ultrasound.  The baby is now measuring 9 weeks and the heart rate was 175.
Next, Dr. A began searching for the other sac when I saw it.... Another flickering heartbeat.  Yes, the second sac (aka vanishing twin) had developed and  did not vanish at all.  Baby B is measuring 8 weeks 2 days and the heart rate was 156.
Boy oh boy was I surprised!  I called Ben during the ultrasound to tell him we got dupped!
After I got dressed again Dr. A came back in and we talked about our little surprise.  Per Dr. A, the baby could either have attached late or is having some development issues.   He said he has seen it played out both ways.  He said the odds our in our favor that we will deliver 2 healthy babies but it is still early and baby B may not survive.
If baby B does not survive, it should not affect baby A.  My body would absorb the fetus.
If baby A does survive (yay!), the age difference will not matter at full term and everything should be ok.
So we are now just waiting.  I have been released from Dr. A and my next appointment is with my obgyn on May 12.  We should know more about the babies then.
Ben is pretty excited and I am just shocked and sick.  I need to lay down every night after Ava goes to bed or I start throwing up.  I have zofran which has helped some days and other days not so much.
Right we are just taking it one day at a time and praying our little surprise is a fighter!
Posted by Kelly at 2:11 PM 4 comments:

Kelly
The hubby and I have been married for over 6 years now. Using IVF, we conceived a spitting image of us. We have 4 fur babies and a cute little home filled with love and happiness.